The CILIP Carnegie and Kate Greenaway Medals are the UK’s oldest and best-loved children’s book awards, recognising outstanding reading experiences created through writing and illustration in books for children and young people. The CILIP Carnegie Medal is awarded by children’s librarians for an outstanding book written in English for children and young people. 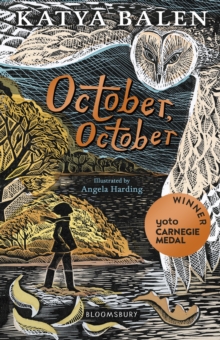 "A timeless, lyrical treasure that sees a girl who’s at one with the wild struggle with the world beyond her woods"

Raw, lingering and stirringly lyrical, October, October had me hooked from opening to end.

Conjured in language that crackles and smoulders like an autumn bonfire, this is a book of bones and bark, of frost and flame, captivating in the manner of Skellig or Stig of the Dump as it undulates towards a wondrous homecoming of the heart.

This year October’s euphoria at the onset of autumn is sullied when she discovers a dead owl and a motherless baby owl: “my heart won’t stop bruising my ribs.” So, she rescues the baby, names it Stig and declares it her first ever friend. Calamity strikes when the woman “who calls herself my mother” arrives as a birthday surprise - her beloved dad breaks his spine after falling from a tree and October must stay with this woman – her mother – in London while he recuperates. In the chaotic city, October is a bird with clipped wings. Torn from her wild world, she implodes, becomes a “firework of fury”, until she strikes up a bond with a boy named Yusef and discovers mudlarking, which makes her once more “a wild animal skulking and prowling for food”, “a pirate hunting for treasure.”

A national (and international) reading for pleasure initiative, the CILIP Carnegie and Kate Greenaway Awards Shadowing scheme engages thousands of children and young people in reading the books on the shortlist via reading groups in schools and public libraries with dedicated educational reading resources and promotional materials to support each shortlist. Each year young people who take part in the scheme are invited to vote for their favourite books to win the Shadowers’ Choice Awards, which are announced alongside the Medal winners at the annual winners’ ceremony. The Medals are awarded annually by CILIP, the library and information association and the Youth Libraries Group with longlists announced in February, shortlists in March and the winners announced at a ceremony in June.

The boy who made everyone laugh Rutter, Helen Paperback

The gilded ones Forna, Namina Paperback

Show us who you are McNicoll, Elle Paperback