The CILIP Carnegie and Kate Greenaway Medals are the UK’s oldest and best-loved children’s book awards, recognising outstanding reading experiences created through writing and illustration in books for children and young people. The CILIP Kate Greenaway Medal is awarded by children’s librarians for an outstanding book in terms of illustration for children and young people. 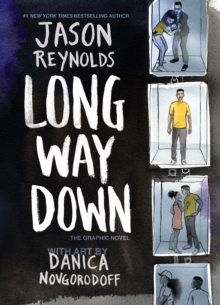 Long way down : the graphic novel

Shortlisted for the CILIP Carnegie Medal 2019, Jason Reynolds’s original Long Way Down novel-in-verse (stunningly illustrated by Chris Priestley) has here been adapted into a glorious graphic novel. The story is as gripping and moving as ever, its atmosphere perhaps even more poignant courtesy of Danica Novgorodoff’s impactful watercolour illustrations. It’s an incredibly poignant story about breaking the cycles of brutal gang culture that will surely now find an even bigger audience.

Two days ago fifteen-year-old Will witnessed the fatal shooting of his big brother. The initial smart of his grief is evoked with characteristic cut-to-the-point lyricism, hauntingly portrayed in a murky, lilac-hued street scene: “When bad things happen, we can usually look up and see the moon, big and bright, shining over us. But when Shawn died, the moon was off.”  Tragically, Will knows the drill in these situations - no crying, no snitching, take revenge. “The Rules weren’t meant to be broken. They were meant for the broken to follow,” so Will gets his brother’s gun and heads into the elevator to exact revenge on Shawn’s murderer. But at each level Will encounters figures from his past, among them his friend Buck who died last year, Dani who was shot in a playground, his Uncle Mark, his father. So many lives lost to violence, and their reappearance causes Will to think; to question his plans and question the rules.

The winner of the Kate Greenaway Shadower's Choice Award was Midnight Fair, click here to find out more.

The house by the lake Harding, Thomas Paperback

While you're sleeping Jackson, Mick Laminated

Over the shop Lawson, JonArno Laminated

A national (and international) reading for pleasure initiative, the CILIP Carnegie and Kate Greenaway Awards Shadowing scheme engages thousands of children and young people in reading the books on the shortlist via reading groups in schools and public libraries with dedicated educational reading resources and promotional materials to support each shortlist. Each year young people who take part in the scheme are invited to vote for their favourite books to win the Shadowers’ Choice Awards, which are announced alongside the Medal winners at the annual winners’ ceremony. The Medals are awarded annually by CILIP, the library and information association and the Youth Libraries Group with longlists announced in February, shortlists in March and the winners announced at a ceremony in June.

We were wolves Cockcroft, Jason Hardback