The aim of the prize is to reward and champion new and emerging children’s writers, voted for by booksellers. For the 2022 prize, books must be new during 2021. There are three categories: Illustrated Books, Books for Younger Readers and Books for Older Readers. 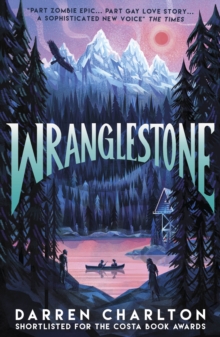 Set in a world that’s become “a walking graveyard”, this edge-of-your-seat thriller teems with cinematic chills and the tender love between two teenage boys. Indeed, author Darren Charlton has hit the nail on the head in describing his debut as The Walking Dead meets Brokeback Mountain. “Clock it. Kill it. Rid the world of it” - this is how encounters with the zombie Restless Ones must be handled, a mantra soon-to-be-sixteen-year-old Peter struggles to follow. Too trusting, and infinitely better with a darning needle than an axe or gun, he’s something of a liability to the community, especially as another winter sets in, for “winter was the one season every Lake Lander feared. Not because Montana was about to get colder than an eagle’s gaze. But because the Dead could make it across the lake’s frozen waters.” When the community comes under serious threat during their annual First Fall party, Peter winds up as zombie bait with his at-one-with-the-wilds boyfriend Connor responsible for wrangling the Restless Ones like a post-apocalyptic cowboy. On the mainland, the young lovers uncover an earth-shattering secret and it’s not long before Connor’s situation is seriously comprised, leading to Peter stepping-up and standing tall. Gripping and graphically gory, this dynamic debut is dystopian horror with a difference, for it pulsates not only with terror and visceral violence, but also with love, affection and emotional atmosphere.

And the stars were burning brightly Jawando, Danielle Paperback

No more than one previously published title of any fiction genre worldwide (educational titles are exempt). The title must make sense as a standalone novel. If the title is illustrated, and the illustrator matches submission criteria for Illustrated Books, then the illustrator will be considered eligible for this category. Narrative non-fiction is also eligible for submission.