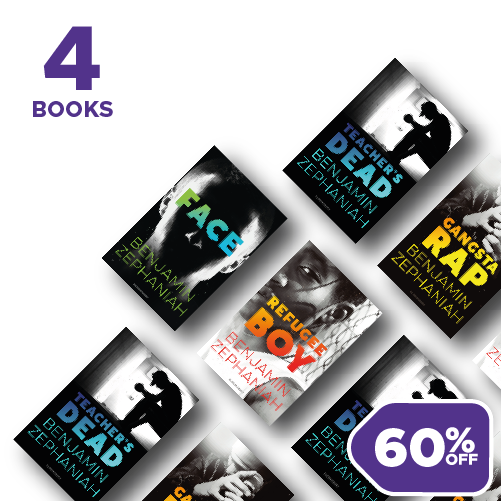 As an internationally respected performance poet and novelist Benjamin Zephaniah has been breaking new ground for BAME writers for decades. His Young Adult novels explore diversity, prejudice and tolerance in the UK with authority, nuance and clarity – their messages are as compelling and vital now as they were when first published.

Brilliantly written and with a real ear for dialogue, fans of Angie Thomas and Malorie Blackman will love the four Benjamin Zephaniah novels in our collection.

Face - a young man's life is completely changed when his face is badly scarred in a joyriding car accident, ultimately showing him the true meaning of courage, discrimination and friendship.

Gangsta Rap - Ray has trouble at home, and he has trouble at school – until he’s permanently excluded and ends up sleeping on the floor of a record shop. What happens to a boy with talent from the wrong side of town?

Refugee Boy - the personal, funny and poignant tale of a young refugee, alone in London, who must forge his own path ...

Teacher's Dead - a thought-provoking and twisty look at the nature of truth and how the media portrays young people accused of serious crimes as a teacher is murdered by two of his students.