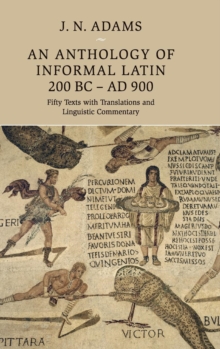 An anthology of informal Latin, 200 BC-AD 900 : fifty texts with translations and linguistic commentary

This book contains over fifty passages of Latin from 200 BC to AD 900, each with translation and linguistic commentary.

It is not intended as an elementary reader (though suitable for university courses), but as an illustrative history of Latin covering more than a millennium, with almost every century represented.

Conventional histories cite constructions out of context, whereas this work gives a sense of the period, genre, stylistic aims and idiosyncrasies of specific passages. 'Informal' texts, particularly if they portray talk, reflect linguistic variety and change better than texts adhering to classicising norms.

Some of the texts are recent discoveries or little known.

Writing tablets are well represented, as are literary and technical texts down to the early medieval period, when striking changes appear.

The commentaries identify innovations, discontinuities and phenomena of long duration.

Readers will learn much about the diversity and development of Latin.