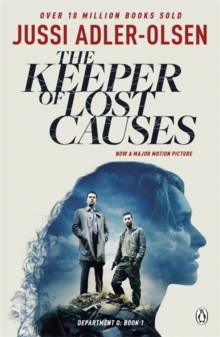 The keeper of lost causes

Part of the Department Q series

The Keeper of Lost Causes (originally published in the UK as Mercy) is the nail-biting first book in the internationally bestselling Department Q series.

It is now a major movie, released in the UK in August 2014. At first the prisoner scratches at the walls until her fingers bleed.

But there is no escaping the room. With no way of measuring time, her days, weeks, months go unrecorded.

She vows not to go mad. She will not give her captors the satisfaction. She will die first. Copenhagen detective Carl Morck has been taken off homicide to run a newly created department for unsolved crimes.

Everyone says she's dead. Everyone says it's a waste of time. He thinks they're right. The voice in the dark is distorted, harsh and without mercy.

It says the prisoner's torture will only end when she answers one simple question.

It is one she has asked herself a million times:Why is this happening?Praise for Jussi Adler-Olsen:'Gripping storytelling' Guardian'Engrossing' Sunday Express'As impressive as it is unnerving' IndependentJussi Adler-Olsen has sold over 10 million books worldwide.

He is the internationally bestselling author of the Department Q series (Disgrace, Redemption, Guilt and Buried) featuring Carl Morck.

The Keeper of Lost Causes was originally published in the UK as Mercy, and is now a major Danish language movie.