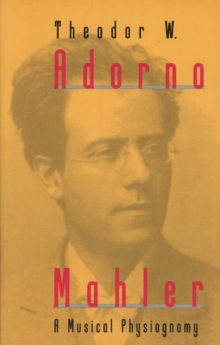 Theodor W. Adorno goes beyond conventional thematic analysis to gain a more complete understanding of Mahler's music through his character, his social and philosophical background, and his moment in musical history.

Adorno examines the composer's works as a continuous and unified development that began with his childhood response to the marches and folk tunes of his native Bohemia. Since its appearance in 1960 in German, Mahler has established itself as a classic of musical interpretation.

Now available in English, the work is presented here in a translation that captures the stylistic brilliance of the original. Theodor W. Adorno (1903-69), one of the foremost members of the Frankfurt school of critical theory, studied with Alban Berg in Vienna during the late twenties, and was later the director of the Institute of Social Research at the University of Frankfurt from 1956 until his death.

His works include Aesthectic Theory, Introduction to the Sociology of Music, The Jargon of Authenticity, Prism, and Philosophy of Modern Music.