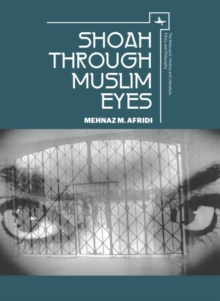 Part of the The Holocaust : history and literature, ethics and philosophy series

Academic Studies Press
1618113658 / 9781618113658
eBook (Adobe Pdf)
940.5318088297
15/07/2015
Available
240 pages
Copy: 10%; print: 10%
In Shoah Through Muslim Eyes, the author discusses her journey with Judaism as a Muslim. Her book is based on the struggle with antisemitism within Muslim communities and her interviews with Shoah survivors. Rejecting polemical myths about the Holocaust and Jews, Afridi offers a new way of creating understanding between the two communities through the acceptance the enormity of the Shoah.

Her journey is both personal and academic: the reader can find nuances of her belief in Islam, principles of justice, and the loneliness of such a journey. The chapters discuss the Holocaust and how it was in truth unprecedented, interviews with survivors, antisemitism and Islamophobia, camps in Arab lands, and Islam and memory. Afridi includes newly-uncovered Muslim-Arab narratives that enhance our understanding of the reach of the Holocaust into Muslim lands under the Vichy and Nazi governments.