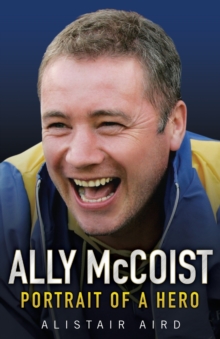 Ally McCoist : portrait of a hero

A schoolboy prodigy, it was always clear that McCoist was destined for top flight football.

At just 16 he signed his first professional contract with St Johnstone, shooting to prominence in the 1980/81 season, scoring 22 league goals and playing a starrring role for the Scottish youth team.

He was soon hot property. After two years of mixed fortunes at Sunderland, McCoist returned to Scotland and signed for his boyhood heroes Glasgow Rangers.

Over the next fifteen years, he established himslef as arguably the greatest goal-scorer ever to play for the club.

He not only gave heart and soul for Rangers but was also capped 61 times for Scotland. An authoritative and affectionate portrait of this much-loved sportsman, Ally McCoist - Portrait of a Hero charts the highs and lows of a fascinating career, culminating in McCoist reaching legendary status.

It also looks at the events that helped to shape his life - overcoming homesickness when first playing for an English club, the effects his parents' seperation had on him and how he coped when his young son had to undergo several life-saving operations. Having hung up his books, Ally's vibrant personality made him a natural for the television screen.

Now, however, he has come full circle and returned 'home' to be assistant manager at his beloved Rangers.

This wonderful book is a must-read for any football fan or indeed for anyone captivated by this larger-than-life character.