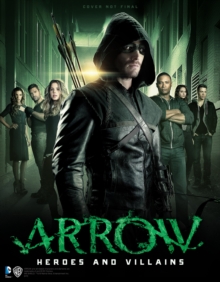 Part of the Arrow series

Arrow - Heroes and Villains is a companion to the hit Warner Bros.

TV show Arrow, to be airing its third season on The CW network.

Based on the DC Comics character, the American TV series Arrow follows billionaire Oliver Queen (Stephen Amell - Heartland, Private Practice) who, after spending five years marooned on a remote island, returns home and secretly creates the persona of Arrow to right the wrongs of his family and fight the ills of society.

Arrow - Heroes and Villains is a comprehensive character guide to the hit Warner Bros.