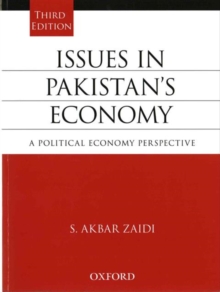 This book is about understanding Pakistan's structural transformation over six decades in a political economy framework. The author examines how and where such transformations have taken place, in the economy, society, in class and gender relations, in manifestations of consumerism and culture, and in other ways.

As has happened so many times in Pakistan's history,unintended consequences have shaped developments.

Yet, social and economic change has also been somewhat anticipated and predictable, giving rise to relatively more certain outcomes. The immense growth of urban populations, a middle class, and a buoyant informal sector, alongside the breakdown of state authority and of state institutions, have been unfolding almost expectedly.

The previous trend of the 'urbanization of everybody', seems to have morphed into an 'urbanization withinformalization', with the co-movements of urbanization and informal relations of production and exchange dominating social and political interactions.

What this means for subsequent development remains uncertain. Issues in Pakistan's Economy: A Political Economy Perspective, will interest serious scholars of Pakistan's economic history and its developments, as well as those who seek to understand how social and economic processes have an impact on numerous outcomes and forms of structural transformation, and how state and society evolve in a political economy perspective.