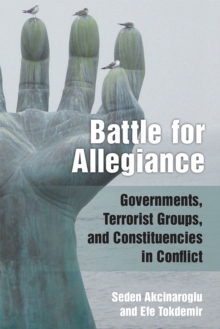 Battle for Allegiance : Governments, Terrorist Groups, and Constituencies in Conflict

Domestic terrorist groups, like all violent non-state actors, compete with governments for their monopoly on violence and their legitimacy in terms of representing the citizenry.

Strategic Battles for Hearts and Minds in Conflict shows violence is neither the only nor the most effective way in which non-state actors and governments work to achieve their goals.

As much as non-violent strategies are a rarely considered piece of the puzzle, the role of the audience is another crucial piece often downplayed in the literature.

Many studies emphasize the interactions between the government and the terrorist group at the expense of the constituency, as the constituency is the common cluster for both actors to gain legitimacy, and to demand its allegiance.

In fact, the competition between the two actors goes far beyond who is superior in terms of military force and tactics.

The hardest battles are fought over the allegiance of the citizens. Using a multi-method approach based on exclusive interviews and focus groups from Turkey and large N original data from around the world, Seden Akcinaroglu and Efe Tokdemir present the first systematic empirical analysis of the ways in which the terrorist group, the government, and the citizens relate to each other in a triadic web of action.

By investigating the causes, targets, and consequences of accommodative actions, this book sheds light on an important, but generally ignored, aspect of terrorism: interactive non-violent strategies.