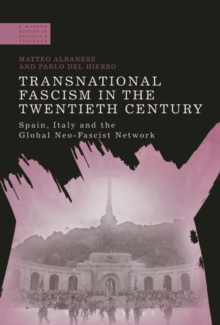 Transnational fascism in the twentieth century : Spain, Italy and the global neo-fascist network

Part of the A Modern History of Politics and Violence series

Developing a knowledge of the Spanish-Italian connection between right-wing extremist groups is crucial to any detailed understanding of the history of fascism.

Transnational Fascism in the Twentieth Century allows us to consider the global fascist network that built up over the course of the 20th century by exploring one of the significant links that existed within that network.

It distinguishes and analyses the relationship between the fascists of Spain and Italy at three interrelated levels - that of the individual, political organisations and the state - whilst examining the world relations and contacts of both fascist factions, from Buenos Aires to Washington and Berlin to Montevideo, in what is a genuinely transnational history of the fascist movement. Incorporating research carried out in archives around the world, this book delivers key insights to further the historical study of right-wing political violence in modern Europe.