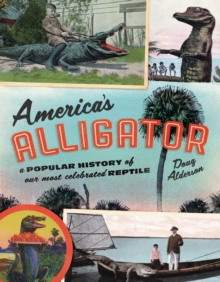 America's alligator : a popular history of our most celebrated reptile

People have long been fascinated by the American alligator.

Ever since humans arrived on the continent more than 15,000 years ago, the American alligator has been both feared and revered, celebrated and scorned, and often hunted for food and hide. Once tourism began to take hold in the South as a real industry, especially in Florida, the alligator took on iconic and even mythical status. "One of the most picturesque features of Florida has always been that uncouth and fierce-looking reptile called the alligator," wrote Nevin O.

Winter in 1918. "Everybody who comes down here to the peninsula has an ambition to see one in the wild." Seminole Indians wrestled alligators for show.

Alligator souvenirs and mascots often took what people feared-a sharp-toothed predator-and made it into something cute and cuddly.

Alligator-themed songs were recorded and released, including "See You Later Alligator" by Bill Haley and His Comets.

Hollywood into created alligator-themed movies such as Alligator People.

Alligators were also reportedly kept in the White House under two presidencies. And perhaps the most unusual alligator story was one that helped to nab Ma Barker and her son Fred when they were hiding out along Florida's Lake Weir. America's Alligator examines the colorful and sometimes conflicted relationship our species has had with Alligator mississippiensis.

Doug Alderson explores the country's rich alligator mythology and how it inspired various forms of art, stories, photography, tourism and even humor.