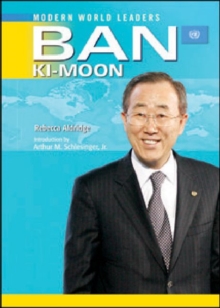 As a child in South Korea, Ban Ki-moon wrote a letter to the U.N. secretary-general regarding the Hungarian uprising against Russia.

A few years later in the United States, he met President John F.

Kennedy. From then on, Ban desired to work for peace, an aspiration that led him to become South Korea's foreign minister in 2004, at a time when tensions between North Korea and its neighbors were heated.

Two years later, he ascended to the position of U.N. secretary-general. Ban has worked to show the benefits of diplomatic approaches in solving conflict, and has called for the world's citizens to change their habits to curb global warming.

To restore people's trust in the battered organization, he has set standards for other U.N. staff. In "Ban Ki-moon", read how his further success in these areas will attempt to keep the U.N. relevant in an increasingly complex world.