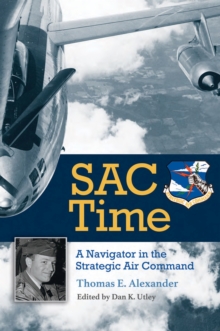 SAC Time : A Navigator in the Strategic Air Command

Thomas E. Alexander was among 20,000 military service personnel ordered into the Strategic Air Command, formed in 1946 as US military and political leaders began to understand the growing nuclear threat posed by Stalin's USSR.

Alexander served for a number of years in this elite force, designed as a primary deterrent to Soviet military ambitions.In this gripping memoir, Alexander describes what it was like to occupy a 'mole hole' beside a SAC runway, ready to go from full sleep to taxiing for takeoff within seven minutes of the sounding of the klaxon.

He shares the experience of sitting on the couch with his family and watching President Kennedy's announcement of the discovery of Soviet missiles in Cuba, realizing that within hours he would be airborne.

He tells what it was like to be at a New Year's Eve party on the base, only to hear the announcement that his unit had just been activated.

Less than twenty-four hours later, he was in Greenland. In SAC Time: Navigating the Strategic Air Command, Alexander presents 'an honest and reflective account of the impact the Cold War had on individuals who were then on the front lines of defense - like it or not.' Coauthor Dan Utley says of Alexander's narrative, 'The story of an ordinary individual in extraordinary times has value. . . . These are stories Tom Alexander has waited much of his life to share with others, but they are as rich as the day they occurred.'