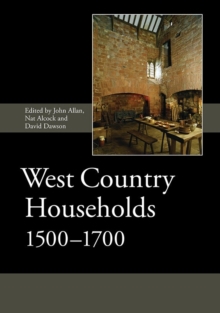 During the last forty years, South-West England has been the focus of some of the most significant work on the early modern house and household in Britain.

Its remarkable wealth of vernacular buildings has been the object of muchattention, while the area has also seen productive excavations of early modern household goods, shedding new light on domestic history. This collection of papers, written by many of the leading specialists in these fields, presents a number of essays summarizing the overall understanding of particular themes and places, alongside case studies which publish some of the most remarkable discoveries.

They include the extraordinary survival of wall-hangings in a South Devon farm, the discovery of painted rooms in an Elizabethan town house, and a study of a table-setting mirrored on its ceiling.

Also considered are forms of decoration which seem specific to particular areas of the West Country houses.