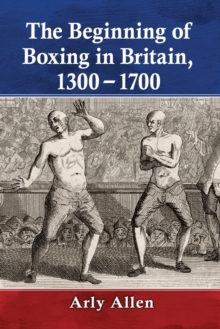 This is the first description of how boxing was reborn in Europe after the end of the ancient world.

It tells the birth of modern boxing: how boxing began as a criminal activity in England; how it then became a sport supported by the aristocracy and the king; how it then was outlawed; and finally, how it became a sport popular around the world. Modern boxing could only have begun in England. It was made possible by the native English sense of Fair Play.

British boxing also drove out the sword and pistol duels common to other countries.

Despite being a brutal sport, boxing made England one of the safest countries in the world. The book describes the meaning of the rituals of boxing: The parade to the ring, the ring itself, the meaning of the handshakes before and after the fight, why a knock-down does not end the fight, and why only two men fight at a time.

This is the first book on boxing to rely on material from medieval manuscripts.

It has extensive footnotes and a large bibliography.