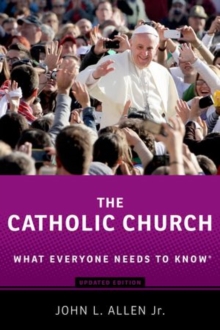 The Catholic Church : what everyone needs to know

Roman Catholicism stands at a crossroads, a classic ''best of times, worst of times'' moment.

On the one hand, the Catholic Church remains by far the largest branch of the worldwide Christian family, and is growing at a remarkable clip.

Yet the Church has also been rocked by a series of scandals related to the sexual abuse of minors by clergy, and, even more devastating, the cover-up by the Church hierarchy.

The decade-long crisis has taken a massive financial toll,but the blow to both the internal morale and the external moral standing of the Church has been even steeper.

The question of ''whither Catholicism'' is of vitalpublic relevance, for believers and non-believers alike.

In The Catholic Church: What Everyone Needs to Know, John L.

Allen, Jr., one of the world's leading authorities on the Vatican, offers an authoritative and accessible guide to the past, present, and future of the Church.

This updated edition includes a new chapter on the resignation of Pope Benedict XVI, the election of Pope Francis, and his extraordinary tenure thus far.