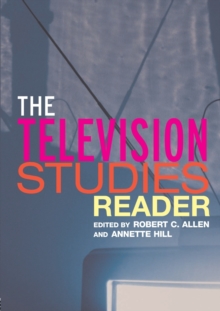 The Television Studies Reader brings together key writings in the expanding field of television studies, providing an overview of the discipline and addressing issues of industry, genre, audiences, production and ownership, and representation.

The Reader charts the ways in which television and television studies are being redefined by new and 'alternative' ways of producing, broadcasting and watching TV, such as cable, satellite and digital broadcasting, home video, internet broadcasting, and interactive TV, as well as exploring the recent boom in genres such as reality TV and docusoaps.

It brings together articles from leading international scholars to provide perspectives on television programmes and practices from around the world, acknowledging both television's status as a global medium and the many and varied local contexts of its production and reception.