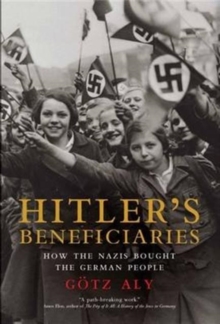 In this groundbreaking book, historian Gotz Aly addresses one of modern history's greatest conundrums: How did Hitler win the allegiance of ordinary Germans?

The answer is as shocking as it is persuasive. By engaging in a campaign of theft on an almost unimaginable scale-and by channeling the proceeds into generous social programs-Hitler literally 'bought' his people's consent.

Drawing on secret files and financial records, Aly shows that while Jews and people of occupied lands suffered crippling taxation, mass looting, enslavement, and destruction, most Germans enjoyed a much-improved standard of living.

Buoyed by the millions of packages soldiers sent from the front, Germans also benefited from the systematic plunder of conquered territory and the transfer of Jewish possessions into their homes and pockets.

Any qualms were swept away by waves of governmenthandouts, tax breaks, and preferential legislation.

Gripping and significant, Hitler's Beneficiaries makes a radically new contribution to our understanding of Nazi aggression, the Holocaust, and the complicity of a people.