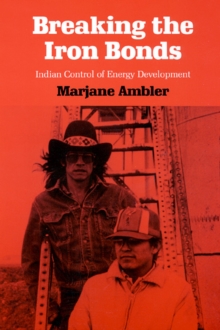 Part of the Development of western resources series

It is, perhaps, not well known that Indian people own about one-third of the country's western coal and uranium resources, as well as vast quantities of oil and natural gas.

In the early 1960s, lurid news accounts about the Black Mesa strip mine in Arizona and the manipulation of the Navajos and Hopis shocked the American public, Indian and non-Indian alike.

The mine became a symbol of the exploitation of Indian people and Indian resources to satisfy the nation's energy demands.

In this book, Marjane Ambler explores the strides that both tribes and individual Indian mineral owners have made since that time, gaining crucial control over oil, gas, coal, and uranium development on their lands.

Breaking the Iron Bonds focuses on the quiet revolution of the 1970s and 1980s.

In a final chapter, the author describes how some tribes have taken over some wells completely or joined with corporate partners to direct development.

Ms. Ambler, who has covered these issues for fifteen years as a journalist, offers firsthand accounts, numerous interviews with major players, and lively descriptions of the heroics of some Indian leaders.

Much of the writing about American Indian issues has focused on either policies adopted by federal government or on the results of those policies on a single reservation.

By contrast, this book shows the effects of tribal and federal energy policies on fifteen western reservations and untangles the complicated legal and technical issues.