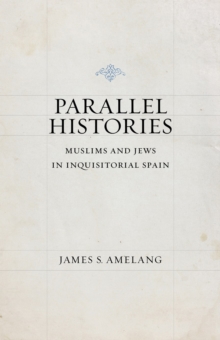 The distinct religious culture of early modern Spain -- characterized by religious unity at a time when fierce civil wars between Catholics and Protestants fractured northern Europe -- is further understood through examining the expulsion of the Jews and suspected Muslims.

While these two groups had previously lived peaceably, if sometimes uneasily, with their Christian neighbors throughout much of the medieval era, the expulsions brought a new intensity to Spanish Christian perceptions of both the moriscos (converts from Islam) and the judeoconversos (converts from Judaism).

In Parallel Histories, James S. Amelang reconstructs the compelling struggle of converts to coexist with a Christian majority that suspected them of secretly adhering to their ancestral faiths and destroying national religious unity in the process. Discussing first Muslims and then Jews in turn, Amelang explores not only the expulsions themselves but also religious beliefs and practices, social and professional characteristics, the construction of collective and individual identities, cultural creativity, and, finally, the difficulties of maintaining orthodox rites and tenets under conditions of persecution.

Despite the oppression these two groups experienced, the descendants of the judeoconversos would ultimately be assimilated into the mainstream, unlike their morisco counterparts, who were exiled in 1609. Amelang masterfully presents a complex narrative that not only gives voice to religious minorities in early modern Spain but also focuses on one of the greatest divergences in the history of European Christianity.