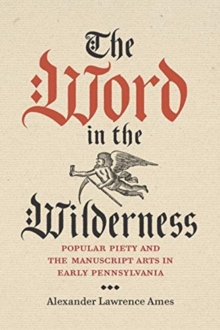 The Word in the Wilderness : Popular Piety and the Manuscript Arts in Early Pennsylvania

Part of the Pietist, Moravian, and Anabaptist Studies series

Once a vibrant part of religious life for many Pennsylvania Germans in the eighteenth and nineteenth centuries, Fraktur manuscripts today are primarily studied for their decorative qualities.

The Word in the Wilderness takes a different view, probing these documents for what they tell us about the lived religious experiences of the Protestant communities that made and used them and opening avenues for reinterpretation of this well-known, if little understood, set of cultural artifacts. The resplendent illuminated religious manuscripts commonly known as Fraktur have captivated collectors and scholars for generations.

Yet fundamental questions about their cultural origins, purpose, and historical significance remain.

Alexander Lawrence Ames addresses these by placing Fraktur manuscripts within a "Pietist paradigm," grounded in an understanding of how their makers viewed "the Word," or scripture.

Situating the manuscripts in the context of transatlantic religious history, early American spirituality, material culture studies, and the history of book and manuscript production, Ames challenges long-held approaches to Pennsylvania German studies and urges scholars to engage with these texts and with their makers and users on their own terms.

Featuring dozens of illustrations, this lively, engaging book will appeal to Fraktur scholars and enthusiasts, historians of early America, and anyone interested in the material culture and spiritual practices of the German-speaking residents of Pennsylvania.