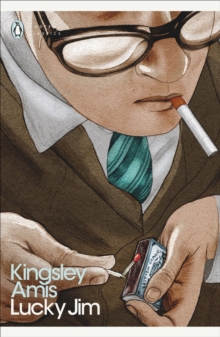 By: Amis, Kingsley,  Lodge, David(Introduction by)

Jim Dixon has accidentally fallen into a job at one of Britain's new red brick universities. A moderately successful future in the History Department beckons - as long as Jim can stave off the unwelcome advances of fellow lecturer Margaret, survive a madrigal-singing weekend at Professor Welch's, deliver a lecture on 'Merrie England' and resist Christine, the hopelessly desirable girlfriend of Welch's awful son Bertrand. Inspired by Amis's friend, the poet Philip Larkin, Jim Dixon is a timeless comic character, adrift in a hopelessly gauche and pretentious world.

Kingsley Amis (1922-1995), born in London, wrote poetry, criticism, and short stories, but is best remembered as the novelist whose works offered a comic deconstruction of post-war Britain. Amis explored his disillusionment with British society in novels such asLucky Jim(1954) andThat Uncertain Feeling(1955); his other works includeThe Green Man(1970)Stanley and the Women(1984), andThe Old Devils(1986) which won the Booker Prize.

'A flawless comic novel ... I loved it then, as I do now. It has always made me laugh out loud'
Helen Dunmore,The Times