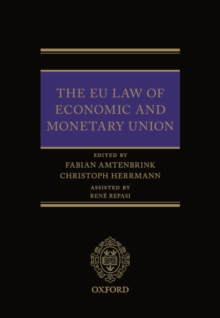 Presenting a sweeping analysis of the legal foundations, institutions, and substantive legal issues in EU monetary integration, The EU Law of Economic and Monetary Union serves as an authoritative reference on the legal framework of European economic and monetary union. The book opens by setting out the broader contexts for the European project - historical, economic, political, and regarding the international framework.

It goes on to examine the constitutional architecture of EMU; the main institutions and their legal powers; the core legal provisions of monetary and economic union; and the relationship of EMU with EU financial market and banking regulation.

The concluding section analyses the current EMU crisis and the main avenues of futurereform.