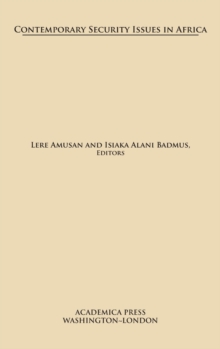 In volume, an emerging generation of African scholars examines specific states in Africa where instability is the order of the day.

Considerations of African instability are highly relevant in today's world, where one examines the types of regimes that were put in place after the Cold War and their effects on Africa.

Multiparty systems introduced in Africa, rather than bringing about inclusive governance, allowed for the emergence of religious strife, ethnic conflict, and cronyism inscribed in the continent's "politicalscapes." The economics of exclusivity fueled by globalization have decisively contributed to the emergence of non-state actors claiming sovereignty in sovereign states.

From Libya's implosion to the low-key war in Mozambique to the crisis of climate change, there are many variables that make stability a mirage on the continent.

Widespread terrorism implies that for the foreseeable future, the continent may be a theater of crises.

Regime change, as seen in Libya, Ivory Coast, and Liberia, not only increases instability in the states concerned, but has and will have spill over effects in adjacent states.

Boko Haram's activities in Nigeria, which ought to be an internal matter of the Abuja government, for instance, are having negative effects in Chad, Niger, and Cameroon.

The effect on food production, disputed access to farmland, and daily challenges faced by food producers are instances of underdevelopment perpetuated by climate change and other challenges considered in this timely book.