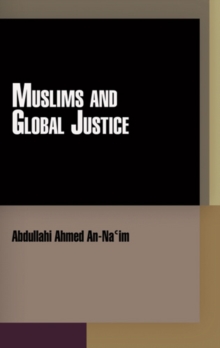 Part of the Pennsylvania Studies in Human Rights series

Over the course of his distinguished career, legal scholar Abdullahi Ahmed An-Na'im has sought to reconcile his identity as a Muslim with his commitment to universal human rights.

In Muslims and Global Justice, he advances the theme of global justice from an Islamic perspective, critically examining the role that Muslims must play in the development of a pragmatic, rights-based framework for justice. An-Na'im opens this collection of essays with a chapter on Islamic ambivalence toward political violence, showing how Muslims began grappling with this problem long before the 9/11 attacks.

Other essays highlight the need to improve the cultural legitimacy of human rights in the Muslim world.

As An-Na'im argues, in order for a commitment to human rights to become truly universal, we must learn to accommodate a range of different reasons for belief in those rights.

In addition, the author contends, building an effective human rights framework for global justice requires that we move toward a people-centered approach to rights.

Such an approach would value foremost empowering local actors as a way of negotiating the paradox of a human rights system that relies on self-regulation by the state. Encompassing over two decades of An-Na'im's work on these critical issues, Muslims and Global Justice provides a valuable theoretical approach to the challenge of realizing global justice in a world of profound religious and cultural difference.