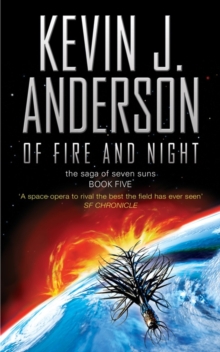 Of fire and night

Part of the THE SAGA OF THE SEVEN SUNS series

After many years of hardship and bravery, the human race faces its greatest challenge.

The sweeping war between titanic races -- a conflict that has obliterated planets, extinguished entire stars, exterminated whole races -- is reaching its end game.

Allies become betrayers, strangers become fast friends, and enemies clash in a struggle that will rock the galaxy.

For years, the alien Klikiss robots have pretended to be humanity's friends, but their seeming help" has allowed them to plant an insidious Trojan Horse throughout the Earth Defence Forces, and the sudden rebellion of Earth's own companies leaves millions dead and the Terran Hanseatic League defenceless.

In a desperate attempt to save his own race, the Ildiran Mage-Imperator Jora'h is forced into a devil's bargain with the evil hydrogues, which will require him to ambush and destroy what remains of the human race.

But the gypsy Roamer clans and the green priests of the towering worldforest -- scattered stepchildren of humanity -- have found innovative ways to fight, as well as strange allies of incomprehensible power.As the climactic battle is engaged, the Ildiran Solar Navy, the Earth Defence Forces, the Roamers, green priests, Klikiss robots, and hydrogue warglobes collide in a fury that will destroy many and change the landscape of the Spiral Arm forever.