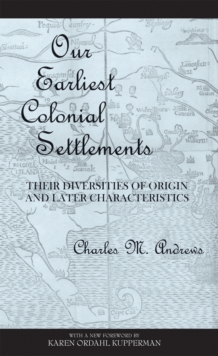 Our Earliest Colonial Settlements : Their Diversities of Origin and Later Characteristics

First published in 1933, Our Earliest Colonial Settlements describes in clear and engaging prose the origins, development, and transatlantic nature of the seventeenth-century English colonies in Virginia, Massachusetts, Rhode Island, Connecticut, and Maryland.

Far ahead of his time in arguing that America's colonial experience could only be understood within the broader history of European colonization, Charles M. Andrews anticipated much of the current scholarship on American colonial history and its place in the Atlantic World.

For this edition, Karen Ordahl Kupperman provides a new foreword that places this pioneering work in the context of past and current scholarship, finding that historians today have returned to Andrews' comprehensive approach.

New materials and new emphases have come to light since this pioneering work was first published but, Kupperman writes, "his priorities and interpretations are still thought-provoking."More than seven decades on, this concise and elegant comparative study of America's first English colonies offers a fascinating and still-relevant perspective on the founding of the United States.