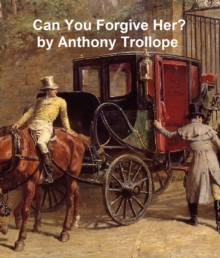 Can You Forgive Her?

The Palliser series consists of:Can You Forgive Her?

According to Wikipedia: &quoteAnthony Trollope ( 1815 - 1882 ) became one of the most successful, prolific and respected English novelists of the Victorian era.

Some of Trollope's best-loved works, known as the Chronicles of Barsetshire, revolve around the imaginary county of Barsetshire; he also wrote penetrating novels on political, social, and gender issues and conflicts of his day.

Trollope's literary reputation dipped somewhat during the last years of his life, but he regained the esteem of critics by the mid-twentieth century. &quoteOf all novelists in any country, Trollope best understands the role of money.

Compared with him even Balzac is a romantic.&quote - W.