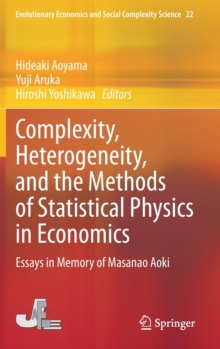 Complexity, Heterogeneity, and the Methods of Statistical Physics in Economics : Essays in Memory of Masanao Aoki

Part of the Evolutionary Economics and Social Complexity Science series

This book systematically provides a prospective integrated approach for complexity social science in its view of statistical physics and mathematics, with an impressive collection of the knowledge and expertise of leading researchers from all over the world.

The book mainly covers both finitary methods of statistical equilibrium and data-driven analysis by econophysics. The late Professor Masanao Aoki of UCLA, who passed away at the end of July 2018, in his later years dedicated himself to the reconstruction of macroeconomics mainly in terms of statistical physics.

Professor Aoki, who was already an IEEE fellow, was also named an Econometric Society Fellow in 1979.

Until the early 1990s, however, his contributions were focused on the new developments of a novel algorithm for the time series model and their applications to economic data.

Those contributions were undoubtedly equivalent to the Nobel Prize-winning work of Granger's "co-integration method".

After the publications of his New Approaches to Macroeconomic Modeling and Modeling Aggregate Behavior and Fluctuations in Economics, both published by Cambridge University Press, in 1996 and 2002, respectively, his contributions rapidly became known and spread throughout the field.

In particular, the publication of Reconstructing Macroeconomics, also by Cambridge University Press (2007), in cooperation with Hiroshi Yoshikawa, further sharpened the process of embodying "a perspective from statistical physics and combinatorial stochastic processes" in economic modeling.

Thus, those who were working in the same context around the world at that time came together, exchanging their results during the past decade.

In memory of Prof. Aoki, this book has been planned by authors who followed him to present the most advanced outcomes of his heritage.