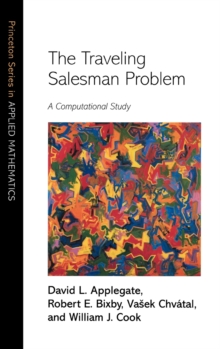 Part of the Princeton Series in Applied Mathematics series

This book presents the latest findings on one of the most intensely investigated subjects in computational mathematics--the traveling salesman problem.

It sounds simple enough: given a set of cities and the cost of travel between each pair of them, the problem challenges you to find the cheapest route by which to visit all the cities and return home to where you began.

Though seemingly modest, this exercise has inspired studies by mathematicians, chemists, and physicists.

Teachers use it in the classroom. It has practical applications in genetics, telecommunications, and neuroscience.

The authors of this book are the same pioneers who for nearly two decades have led the investigation into the traveling salesman problem.

They have derived solutions to almost eighty-six thousand cities, yet a general solution to the problem has yet to be discovered.

Here they describe the method and computer code they used to solve a broad range of large-scale problems, and along the way they demonstrate the interplay of applied mathematics with increasingly powerful computing platforms.

They also give the fascinating history of the problem--how it developed, and why it continues to intrigue us.