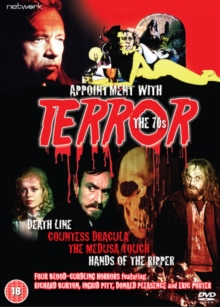 Appointment With Terror: The 70s

Collection of 1970s horror films. In 'Death Line' (1972) an underground tunnel collapses in London in 1892, and those trapped under its rubble survive only by eating each other's flesh.

Subsequent generations live on via similar means, but eventually only one remains.

Forced out of hiding, the disease-ridden cannibal begins to look for his nutrition on the platform of the Russell Square Tube line.

Bathory discovers that bathing in the blood of virgins keeps her looking youthful and arranges for the kidnapping of her own daughter, Ilona (Lesley-Anne Down), in order to use her blood.

She takes on Ilona's identity and seduces a young man but the supply of blood needs constant topping up otherwise Bathory will age vigorously.

In 'The Medusa Touch' (1978) novelist John Morlar (Richard Burton) is haunted by the belief that he can, through the power of telekinesis, cause fatal disasters to occur.

This obsession is reinforced when, after Morlar is assaulted, a moon mission crisis and jet crash occur in short order.

The police turn to Morlar's mysterious therapist, Zonfeld (Lee Remick), to try to get to the bottom of the case.

Finally, in 'Hands of the Ripper' (1971) Anna (Angharad Rees), as a child, witnesses the death of her mother at her evil father's hands and is unknowingly the daughter of Jack the Ripper.

Some 15 years later the young woman has become terribly troubled by something and enters strange violent trances.

Her case is assigned to psychiatrist Dr Pritchard (Eric Porter) who believes he can cure Anna, but as he uncovers her violent memories and her murderous behaviour is unleashed he starts to fear that the case is spiralling out of control.