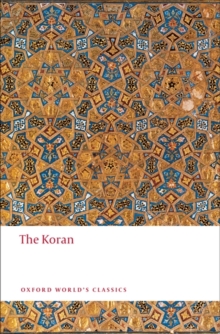 By: Arberry, Arthur J.(Translated by)

The Koran is a book apart, not only as Holy Scripture for Muslims, but as the supreme classic of Arabic literature.

In its 114 Suras, or chapters, it comprises the total of revelations believed to have been communicated to the prophet Muhammad as a final expression of God's will and purpose for man.

The revelations were received over a number of years, the first dating from AD 610, the last shortly before Muhammad's death in AD 632, and the definitive canon wasestablished some twenty years later.

The Koran is neither prose nor poetry but a unique fusion of both. In his attempt to convey the sublime rhetoric of the original, Professor Arberry has carefully studied the intricate and richly varied rhythms which - apart from the message itself - serve to explainthe Koran's undeniable claim to rank among the greatest literary masterpieces of mankind.