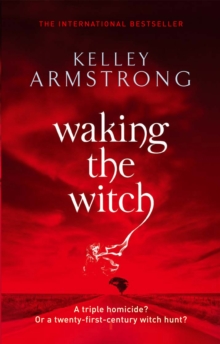 Part of the Otherworld series

'Armstrong is quite deft at making Savannah simultaneously formidable, sympathetic and real. . . . A quick and fun read, Waking the Witch is . . . a good starting point for readers new to Armstrong.' - The Miami Herald'Kelley Armstrong must have decided one day to throw every genre she could imagine -- mystery, horror, supernatural thriller, romance and chick lit -- into her writerly cauldron.

What she conjured up is the hilariously hip Women of the Otherworld series.' - Calgary HeraldColumbus is a small, fading town, untouched by the twenty-first century.

But when three young women are found dead - victims of what appear to be ritual murders - things start to get very dark, and very dangerous . . . Private investigator Savannah Levine can handle 'dark and dangerous'.

As the daughter of a black witch, she has a lot of power running through her veins, and she's not afraid to use it.

But her arrival in Columbus has not gone unnoticed. Savannah may think she's tracking down a murderer, but could she be the killer's next target?Of course she could always ask her old friend (and half-demon) Adam Vasic for backup.

But Savannah has her own - very personal - reasons for keeping Adam well away from Columbus. And in any case, she can rely on her own powers. Can't she . . . ?Books by Kelley Armstrong: Women of the Otherworld series Bitten Stolen Dime Store Magic Industrial Magic Haunted Broken No Humans Involved Personal Demon Living with the Dead Frost Bitten Walking the Witch Spellbound Thirteen Nadia Stafford Exit Strategy Made to be Broken Wild Justice Rockton City of the Lost A Darkness Absolute This Fallen Prey Watcher in the Woods Alone in the Wild Darkest Powers The Summoning The Awakening The Reckoning Otherworld Tales Men of the Otherworld Tales of the Otherworld Otherworld Nights Otherworld Secrets Otherworld Chills Darkness Rising The Gathering The Calling The Rising Cainsville Omens Visions Deceptions Betrayals Rituals