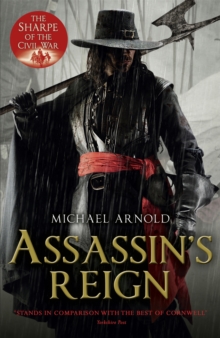 Part of the Stryker series

Assassin's Reign, the fourth in The Civil War Chronicles, Michael Arnold's acclaimed series of historical thrillers, sees battle-scarred hero Captain Stryker, 'the Sharpe of the Civil War', in the fight of his life. 'Stands in comparison with the best of Cornwell' Yorkshire PostThe forces of King Charles are victorious; their Parliamentarian enemies in deep crisis.

In the west, the crucial port city of Bristol has fallen, and Royalist eyes fall quickly upon neighbouring Gloucester.

Its walls are weak, its garrison under strength, and its governor - Sir Edward Massie - suspected of harbouring sympathy for the King. Stryker and his men are with the army as it converges on Gloucester, still reeling from the loss of a close friend at the bloody Battle of Stratton. Ordered to infiltrate the rebel city on a mission to discover whether Massie will indeed surrender, Stryker reluctantly embarks upon his most desperate mission yet.

But Gloucester's defenders are more resolute than any had imagined, and catastrophe soon befalls him.

With his life seemingly forfeit, Stryker is spared by an unlikely saviour; Vincent Skaithlocke, his former commander.

The mercenary has returned to England to fight for Parliament, and offers Stryker his protection.

As old friends adjust to life fighting for opposing sides, Stryker begins to question his own loyalties . . . but a chance discovery makes him realise that all in Gloucester is not what it seems, for a hidden menace threatens his own life, and that of King Charles himself.