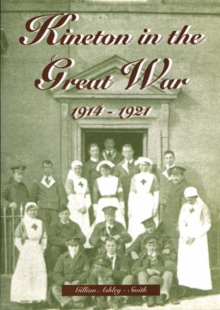 An attempt to trace the stories of the 38 men named on its War Memorial led the author to the study of Kineton at the time of World War I.

Kineton, once a thriving market town and capital of its own tiny administrative area, is today little more than a village tucked away in rural South Warwickshire, and at the time of the outbreak of the war had, it is said, more horses than people.

Starting with the departure of horses and soldiers for the front within hours of war being declared, this book continues with the establishment of a voluntary hospital in the village.

This hospital, staffed almost entirely by village residents, was one of the first and one of the largest in Warwickshire, and treated over 2000 wounded soldiers in the four years of its existence.

The first part of the book ends with peace, and the building of a stone War Memorial.

The second part of the book is a tribute to the service of the 250 men in the trenches and the 200 or so nurses at the hospital - nearly half the population. Some of the experiences of the soldiers are revealed in their letters home, letters which include a jingoistic report from a young officer, the description of an early dog-fight, and an account of death at the front.

A comprehensive list, gathered from a variety of sources, of all who served in uniform, and biographies of some of the leaders of village society complete this history.