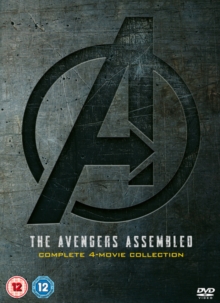 Collection of four superhero action adventures based on the Marvel Comics characters.

In 'Avengers Assemble' (2012) Nick Fury (Samuel L. Jackson) and the international S.H.I.E.L.D. agency must act swiftly to form The Avengers, a team of ultimate superhero defenders, when Earth comes under attack from Loki (Tom Hiddleston) and his multi-faceted army.

This all-action supergroup comprises Iron Man (Robert Downey Jr.), Thor (Chris Hemsworth), Captain America (Chris Evans), Black Widow (Scarlett Johansson), Hawkeye (Jeremy Renner) and The Hulk (Mark Ruffalo) - but will their combined powers be sufficient to overcome the formidable Loki and save the Earth from the clutches of evil?

In 'Avengers: Age of Ultron' (2015), in an attempt to bring peace to the world, Tony Stark aka Iron Man creates Ultron (voice of James Spader), a robot with artificial intelligence.

However, instead of protecting humans, Ultron believes the only way to restore peace to Earth is to eliminate its citizens.

The Avengers team up once again to save the day, but can they defeat Ultron before he obliterates the human race?

In 'Avengers: Infinity War' (2018), with the future of the universe coming under threat from the powerful Thanos (Josh Brolin), the Avengers and their allies must join together and put their lives on the line as they bid to put a stop to Thanos's evil schemes.

Finally, in 'Avengers: Endgame' (2019) the surviving Avengers attempt to undo the destruction caused by Thanos and the Infinity Stones.