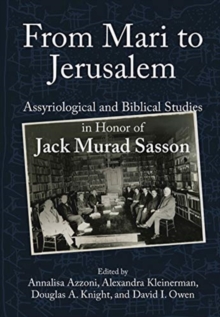 From Mari to Jerusalem and Back : Assyriological and Biblical Studies in Honor of Jack Murad Sasson

Jack Murad Sasson, distinguished scholar of the ancient Near East, has enjoyed a long career studying the cultures, languages, and literatures of that consequential region.

His many books and articles span a seemingly endless array of topics and materials.

Foremost are his in-depth analyses of the Syrian city of Mari and its remarkable heritage.

Of comparable importance are his definitive studies of the Hebrew Bible, in particular his commentaries on the books of Judges, Ruth, and Jonah.

In addition, the encyclopedic four-volume set he initiated and edited, Civilizations of the Ancient Near East, stands out as an exceptional contribution to peers, students, and the general public. To honor him and his scholarly achievements, thirty-five of his longtime colleagues and friends have collaborated to produce this volume of essays on such diverse cultures as Sumer, Babylonia, Assyria, the Amorites, Egypt, Ebla, the Hurrians, the Hittites, Ugarit, the Arameans, Canaan, and Israel.

The studies in this volume display the richness of these cultures-their literary legacies, languages, political and social histories, material remains, religions and rituals, and history of ideas-as well as their reception in modern times.

The volume is both a contribution to the evolving study of the ancient Near East and also a fitting tribute to Jack Sasson, whose friendship and scholarship we have long cherished and esteemed.