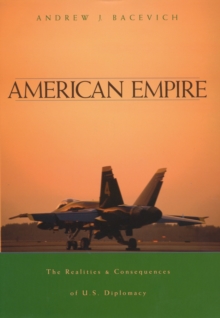 American empire: the realities and consequences of U.S. diplomacy

In a challenging, provocative book, Andrew Bacevich reconsiders the assumptions and purposes governing the exercise of American global power.

Examining the presidencies of George H. W. Bush and Bill Clinton--as well as George W. Bush's first year in office--he demolishes the view that the United States has failed to devise a replacement for containment as a basis for foreign policy.

He finds instead that successive post-Cold War administrations have adhered to a well-defined "strategy of openness." Motivated by the imperative of economic expansionism, that strategy aims to foster an open and integrated international order, thereby perpetuating the undisputed primacy of the world's sole remaining superpower.

Moreover, openness is not a new strategy, but has been an abiding preoccupation of policymakers as far back as Woodrow Wilson.

Although based on expectations that eliminating barriers to the movement of trade, capital, and ideas nurtures not only affluence but also democracy, the aggressive pursuit of openness has met considerable resistance.

To overcome that resistance, U.S. policymakers have with increasing frequency resorted to force, and military power has emerged as never before as the preferred instrument of American statecraft, resulting in the progressive militarization of U.S. foreign policy. Neither indictment nor celebration, American Empire sees the drive for openness for what it is--a breathtakingly ambitious project aimed at erecting a global imperium.

Large questions remain about that project's feasibility and about the human, financial, and moral costs that it will entail.

By penetrating the illusions obscuring the reality of U.S. policy, this book marks an essential first step toward finding the answers.

Table of Contents: Preface Introduction 1. The Myth of the Reluctant Superpower 2. Globalization and Its Conceits 3. Policy by Default 4. Strategy of Openness 5. Full Spectrum Dominance 6. Gunboats and Gurkhas 7. Rise of the Proconsuls 8. Different Drummers, Same Drum 9. War for the Imperium Notes Acknowledgments Index Reviews of this book: [A] straightforward "critical interpretation of American statecraft in the 1990s"...he is straightforward, too, in establishing where he stands on the political spectrum about US foreign policy...Bacevich insists that there are no differences in the key assumptions governing the foreign policy of the administrations of Bush I, Clinton, and Bush II--and this will certainly be the subject of passionate debate...Bacevich's argument persuades...by means of engaging prose as well as the compelling and relentless accumulation of detail...Bring[s] badly needed [perspective] to troubled times.--James A.

Miller, Boston GlobeReviews of this book: For everyone there's Andrew Bacevich's American Empire, an intelligent, elegantly written, highly convincing polemic that demonstrates how the motor of US foreign policy since independence has been the need to guarantee economic growth.--Dominick Donald, The GuardianReviews of this book: Andrew Bacevich's remarkably clear, cool-headed, and enlightening book is an expression of the United States' unadmitted imperial primacy.

It's as bracing as a plunge into a clear mountain lake after exposure to the soporific internationalist conventional wisdom...Bacevich performs an invaluable service by restoring missing historical context and perspective to today's shallow, hand-wringing discussion of Sept. 11...Bacevich's brave, intelligent book restores our vocabulary to debate anew the United States' purpose in the world.--Richard J.

Whalen, Across the BoardReviews of this book: To say that Andrew Bacevich's American Empire is a truly realistic work of realism is therefore to declare it not only a very good book, but also a pretty rare one.

The author, a distinguished former soldier, combines a tough-minded approach to the uses of military force with a grasp of American history that is both extremely knowledgeable and exceptionally clear-sighted.

This book is indispensable for anyone who wants to understand the background to U.S. world hegemony at the start of the 21st century; and it is also a most valuable warning about the dangers into which the pursuit and maintenance of this hegemony may lead America.--Anatol Levin, Washington MonthlyReviews of this book: American Empire is an immensely thoughtful book.

Its reflections go beyond the narrow realm of U.S. security policy and demonstrate a deep understanding of American history and culture.--David Hastings Dunn, Political Studies ReviewI have long suspected our nation's triumphs and trials owed much to the American genius for solipsism and self-deception.

Bacevich has convinced me of it by holding up a mirror to self-styled idealists and realists alike.

Read all the books you want about the post-Cold War, post-9/11 world, just be sure American Empire is one of them.--Walter A.

McDougall, Pulitzer Prize-winning historian, University of PennsylvaniaThis deeply informed, impressive polemical book is precisely what Americans, in and outside of the academy, needed before 9/11 and need now even more.

Crisp, lively, biting prose will help them enjoy it.

Among its many themes are hubris, hegemony, and the fatuousness of claims by the American military that they can now achieve 'transparency' in war-making.--Michael S.

Sherry, Northwestern UniversityThe United States could not possibly have an empire, Americans think.

But we do. And with verve and telling insight Andrew Bacevich shows how it works and what it means.--Ronald Steel, author of Temptations of a Superpower: America's Foreign Policy after the Cold War