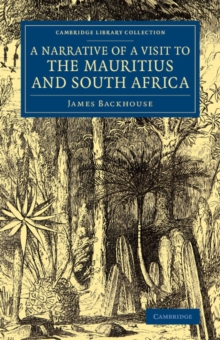 A narrative of a visit to the Mauritius and South Africa

James Backhouse (1794-1869) came from a family of accomplished naturalists and horticulturalists.

As a Quaker, he spent several years in Australia engaged in missionary and humanitarian work, after which he returned to England via Mauritius and South Africa.

The present work, first published in 1844, is adapted from his journals of that journey, providing a rich and personal account.

It contains vivid descriptions of the people he encountered, particularly the indigenous communities and those involved in the slave trade, which he found revolting and unchristian.

Backhouse's horticultural interests are evident in the detailed botanical observations he made, the value of which led to a genus of shrub being named after him: Backhousia.

This work contains illustrations based on original sketches made by Backhouse during the trip, and appendices which include letters and texts relating to the mission, as well as a map of South Africa.