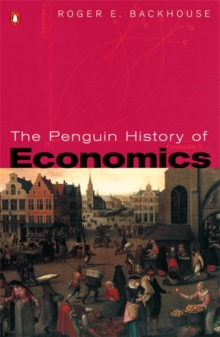 The Penguin history of economics

Nobody can ignore economics. There are never enough resources to go round, so human beings have always wrestled with the crucial issues of money, markets, bargaining, prices and production.

In this new and authoritative history, Roger Backhouse takes the story of economics from the Greeks to the dawn of the 21st century.Economics emerged only slowly as a distinct discipline, out of theology, moral philosophy, administration and law.

It has been deeply influenced by scientific theories like House of Newton and Darwin, by mathematical methods such as game theory, by statistical techniques and technological advances. And it has always confronted practical issues of welfare and warfare, colonialism and development, the collapse of communism and the difficult transition to capitalist democracy.In addition to placing well-known figures - including Adam Smith, Malthus, Marx and Keynes - in their historical settings, Backhouse brings into his story many important topics that are often neglected.

These include the importance of Islam in the Middle Ages; science, politics and economics in 17th-century England; the rise of economics in the USA; inter-war debates over socialism versus the market; the impact of the Second World War; and the late-20th-century proliferation of fields within economics.