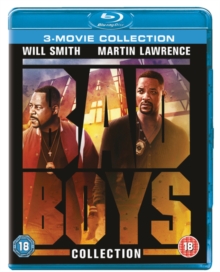 Triple bill of action comedies. In 'Bad Boys' (1995) detectives Mike Lowrey (Will Smith) and Marcus Burnett (Martin Lawrence) must catch the thief who stole $100 million worth of confiscated heroin from under their noses to save their department from being closed down by the FBI.

Beautiful, but not altogether trustworthy witness Julie (Téa Leoni) comes forward to help the two cops, who both fall for her straight away.

This leads to a series of identity changes and bullet dodging.

In 'Bad Boys II' (2003) Lowrey and Burnett are investigating an ecstasy drug ring on the streets of Miami after being assigned to a high-tech task force.

Their inquiries lead them to the vicious Cuban Johnny Tapia (Jordi Mollà), but as usual things do not go according to plan as tensions mount between the two cops.

Explosions and violent gun battles ensue as they wreak a path of destruction in the pursuit of justice.

Finally, in 'Bad Boys for Life' (2020), as Mike and Marcus prepare to start taking things easy as age catches up with them, an old enemy threatens to destroy their peaceful descent into retirement.

With Mike assigned to the A.M.M.O department and Marcus now an inspector, they must reunite if they are to defend themselves and their right to retire.