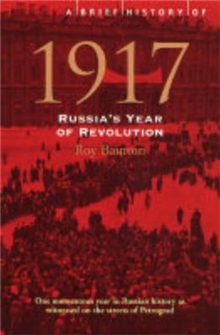 A brief history of 1917 : Russia's year of revolution

Part of the Brief histories series

The words are those of a working class Red Army veteran and they are in stark contrast to the opinion of a 34-year-old Russian entrepreneur: "Lenin and Trotsky were totally evil men - they turned my country into a nightmare..." What was it like to be a worker in Petrograd or Moscow before the Revolution?

How much did a tram driver's family know about Bolshevism?

What was the price of a loaf of bread or a pair of boots?

Who kept the power stations running, the telephone exchanges, bakeries, farms and hospitals?

How did it feel to be a stockbroker one day, then a forced labourer the next?

The Great War tore at the nation's heart, and Russia's autocracy dined and danced while the people starved.

The Revolution of 1917 has remained a controversial political and academic battleground - much has been written about Lenin, Trotsky and Kerensky, their politics relentlessly analysed.

Yet there is also a compelling human side, and Roy Bainton tells it, not only through the staggering bravado of revolutionary politicians, but through the poignant stories recounted to him by ordinary families whose hopes and aspirations were soon turned to fear.