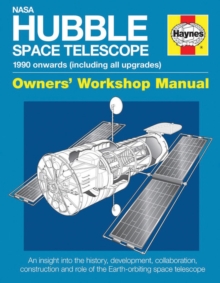 The Hubble Space Telescope (HST), which celebrates 25 years of successful operation in April 2015, is an international venture primarily between the USA and Europe.

More than any other space project, Hubble has encouraged an expanding interest in popular astronomy.

With stunning views of the cosmos, it has inspired a new generation of enthusiasts to study the night sky through simple telescopes or in books.

As such it has linked space technology with popular interest in astronomy and has thrilled specialists and the lay public alike.

This fascinating manual, illustrated with a wealth of technical illustrations and stunning imagery taken from Hubble itself, takes in in-depth look at the origins of the HST, its design, development, manufacture and assembly, how it operates, and what it has accomplished, as well as the unique man-tended design philosophy for launch and servicing using the Shuttle.