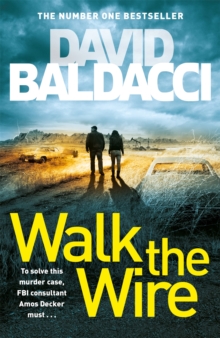 Remember his name: FBI Agent Amos Decker is back in a thrilling memory man investigation from number one bestseller, David Baldacci. A town with a secret. A lone hunter discovers the remains of a woman in North Dakota's Badlands.

She appears to have had a post-mortem performed on her reminiscent of those only seen on TV shows - but this time, there was no slab, morgue or camera in sight. A victim without a past. The reason why Irene Cramer's death merits an FBI investigation becomes rapidly clear when key questions surface about her mysterious past.

Little is known about this school teacher, where she came from or her true identity.

She clearly had something to hide. A hero with a unique skill. FBI investigator, Amos Decker and his colleague, Alex Jamison, are summoned to seek answers in the local community of London, North Dakota, which sits at the very heart of the fracking industry.

Enriched with oil money, jealousy and a deep-set rivalry lie beneath a veneer of glitz and opulence. Decker soon realizes that the nearby 'eye in the sky', the Air Force Station, may hold the vital clues and that this town holds secrets so explosive that they could destabilize the entire country . . Walk the Wire by David Baldacci is the sixth book in the Amos Decker series. Once read, never forgotten.