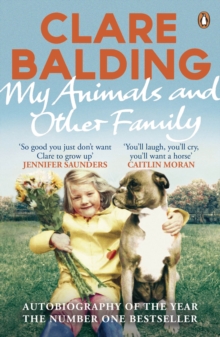 My animals and other family

My Animals and Other Familyby Clare Balding is a funny, brave, tender story of self-discovery

'I had spent most of my childhood thinking I was a dog, and suspect I had aged in dog years.'

Clare Balding grew up in a rather unusual household. Her father a champion trainer, she shared her life with more than 100 thoroughbred racehorses, mares, foals and ponies, as well as an ever-present pack of boxers and lurchers. As a toddler she would happily ride the legendary Mill Reef and take breakfast with the Queen.

She and her younger brother came very low down the pecking order. Left to their own devices, they had to learn life's toughest lessons through the animals, and through their adventures in the stables and the idyllic Hampshire Downs. From the protective Candy to the pot-bellied Valkyrie and the frisky Hattie, each horse and each dog had their own character and their own special part to play.

The running family joke was that "women ain't people". Clare had to prove them wrong, to make her voice heard - but first she had to make sure she had something to say.

'Funny and unexpectedly wise. Balding has lots of good stories to tell. It is impossible not to admire her honestyMail on Sunday

Clare Balding is an award-winning broadcaster and writer. She has been a lead presenter for the Olympics, Paralympics, Winter Olympics and Commonwealth Games. For more than twelve years, she has hiked across the countryside for the BBC Radio 4 seriesRamblings. Clare has presentedCountryfile,Britain's Hidden Heritage, Britain By Bike,Crufts, andFamous & Fearless, and has appeared onQI,Have I Got News for YouandSport Relief. She has been voted RTS Sports Presenter of the Year and Racing Broadcaster of the Year. She lives in West London with her partner Alice, their wayward Tibetan Terrier Archie and a cat who couldn't give a damn called Itty.My Animals and Other Familyis Clare's first book.