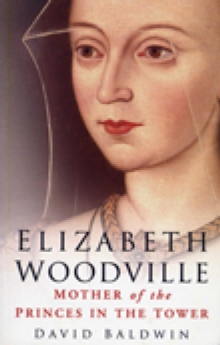 Elizabeth Woodville: mother of the Princes in the Tower

Elizabeth Woodville is a historical character whose life no novelist would ever have dared invent.

She has been portrayed as an enchantress, as an unprincipled advancer of her family's fortunes and a plucky but pitiful queen in Shakespeare's histories.

She has been alternatively championed and vilified by her contemporaries and five centuries of historians, dramatists and novelists, but what was she really like?In this revealing account of Elizabeth's life David Baldwin sets out to tell the story of this complex and intriguing woman.

Was she the malign influence many of her critics held her to be?

Was she a sorceress who bewitched Edward IV? What was the fate of her two sons, the 'Princes in the Tower'?

What did she, of all people, think had become of them, and why did Richard III mount a campaign of vilification against her?

David Baldwin traces Elizabeth's career and her influence on the major events of her husband Edward IV's reign, and in doing so he brings to life the personal and domestic politics of Yorkist England and the elaborate ritual of court life.