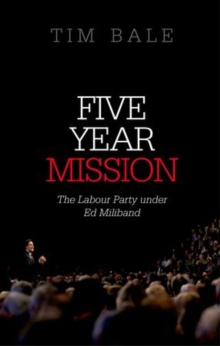 In May 2010, Labour suffered one of its worst ever election defeats.

A few months later it chose Ed Miliband as its new leader. His task? To win back power after just one term in opposition - a tall order given how many voters had come to blame Labour for the economic mess the country was in, and to see the party as a soft-touch when it came to immigration and welfare. Even those who were more sympathetic had their doubts.

Was Ed Miliband really leadership material? Would he be able to overcome defeating his elder brother to get to the top?

Would he have to do as he was told by the trade union leaders who had helped him win?

Could he resolve the tensions between Blairites and Brownites, Blue Labour and New Labour?

Might his desire to keep his colleagues united mean Labour stayed stuck in its comfort zone? Would he, in seeking to break from the party's recentpast, take it too far to the left? Could he offer the electorate something really radical in 2015 or would he instead choose something safer but ultimately less inspiring? And what should twenty-first social democracy look like now that the money had run out?

This book, by one of the country's foremost experts on party politics, seeks to answer all those questions and, in the run up to the 2015 general election, to ask one more: will Ed Miliband's five year mission turn out to be 'mission impossible'?